Ayahuasca in Bolivia (A Short Story) 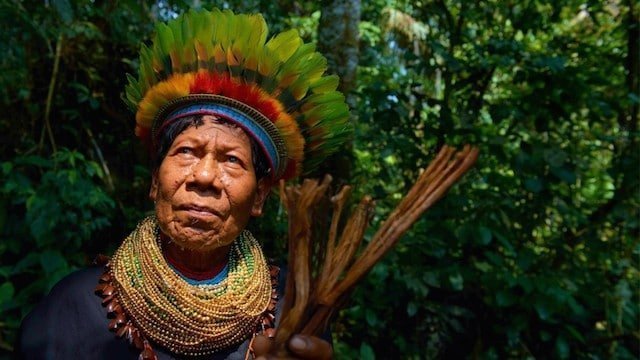 Its early evening and Badi is looking out the fifth-story window of her new apartment perched in Cochabamba’s northern foothills. With the 18,000 foot peaks of Mount Tunari to her back, Badi’s apartment surveys the valley below. To the West, a clear view of the “Christo de Concordia;” a 33 meter statue of Jesus strikingly similar to his more famous South American brother in Rio De Janeiro. To the east, the sun’s glare superimposes itself over Cochabamba’s vast urban sprawl. Its rush hour and the chaotic traffic below is palpable.

Aware of our fortunate position above, Badi and I relax with a popular herbal tea of coca, chamomile and anise aptly called “trimate.” We’ve spent the last few minutes in comfortable silence, but I’m eager to start conversing. Finishing off the last of her tea, Badi faces me with a serious expression and asks in a soft voice, “Have you ever see the movie ‘El Nombre del Juego’ (Get Shorty) staring John Travolta?” I’m not familiar with the Spanish translation of the movie title and tell her so. “Well, in the movie there’s a scene where one of the characters says the only reason the sunsets are beautiful in Los Angeles is because of all the smog. I’ve never been to L.A. but the sunsets sure are beautiful here. Don’t you think? I just hope its not for the same reason. I’d take duller colors for clean air any day.” Today is Friday and throughout Cochabamba, and other Andean cities and towns of Bolivia, people are burning their offerings to “Pachamama” (Mother-Earth). Such ceremonies occur every first-Friday of the month where people make or purchase premade “Q’owas” composed of intricately arranged incenses, herbs, coca leaves, candies, fake money, and other talismans. Every charm represents a distinct hope – financial prosperity, love, physical health or perhaps safe travel. The Q’owa is set over a small barbeque-like structure where a fire is already stoked; feeding Pachamama, the result is a thick and pungent smoke used to bless people who bath in its aroma. The structure is frequently brought inside houses, cars, and businesses, blessing not only the individual but also his or her possessions. Families, friends, and coworkers gather around the fire for hours, chewing coca leaves while sharing soda or another less innocuous beverage. As Badi and I continue to appreciate the view from the confines of her living room, the last remnants of daylight are replaced by thousands of small twinkling fires below. A smog-like haze envelopes the city. I’m curious if Badi has blessed her new apartment and pose the question. She shakes her head: “No, its not part of my culture. I know about the ceremony. Its to renew energy and to purify one’s home and possessions. Its so you can be healthy and prosperous, but my family never did this.” She explains that even though she spent most of her childhood in La Paz, her family is from the Eastern lowlands of Bolivia. She left the lowlands as a child and spent all her formative years in La Paz or Cochabamba. “It was difficult for me because jungle people are very different. My family has different customs. We’re different people.” Badi’s boyfriend Coco enters the room, shakes my hand, serves himself a cup of tea and quickly returns to the bedroom. He’s busy making a music playlist on ITunes and organizing everything for tonight’s ceremony. “It’ll just be the two of us tonight,” Badi explains. “And how are you going to light the Q’owa in the apartment?” She unleashes a sly grin, “As you know, we are preparing for a different type of ceremony.” In the same moment, as if one cue, Coco emerges from the bedroom and methodically places the supplies on the coffee table: four mapacho cigarettes, palo santo, aqua florida, two plastic buckets, one tutuma, and a bottle of ayahuasca she brought back from an Ayahuasca Retreat. I ask Badi about the items individually, what they are, and where they come from? Badi turns to face me directly and with a gentle smile she assumes the role of informant: “The mapacho cigarettes, palo santo and aqua florida are purchased in the same section of La Cancha [Cochabamba’s outdoor market] as the Q’owa. You know, the witches section.” I nod in understanding. “You see, mapacho is a very different type of tobacco, more pure, without any chemicals. In Cochabamba they are often used by healers in purification ceremonies. In the jungle, the cigarettes are also essential. They are used to feed the spirits. The spirits love mapacho. I don’t particularly like smoking them but they are very important. By feeding the spirits, they also help bring on the visions and alleviate nausea. As for the palo santo, it produces a sweet smell when burned. In the jungle we use it to ward off mosquitoes, but I use it here in Cochabamba because it reminds me of the jungle and helps transport me there, where I obtain my strength. Its easy to find here because people often burn it with their Q’owas. The aqua florida is present in all types of ceremonies. I’m not exactly sure why but I think the spirits like its smell.” When Badi mentions aqua florida I remember Steven Beyer’s book, “Singing to the Plants” where he discusses its use in traditional healing ceremonies of the Upper Amazon. Aqua Florida was first manufactured for Victorian ladies in the nineteenth century by the firm of Murray and Lanman in New York (Beyer 2010). Over time its use has become synonymous with distinct world-wide shamanistic practices. As stated by Beyer, “It is remarkable that this commercial cologne should have assumed such a central role not only in shamanism of the Peruvian Amazon but also for magical purposes among people of African diaspora descent in the United States and the Caribbean” (Beyer 2010: 128). The cologne is prevalent in Andean healing ceremonies and has now made its way into Badi’s living room. And the other items I ask. “Well, as you know the buckets are for when we get sick. Not pleasant but necessary.” She picks up a shell about the size of her palm and continues, “I purchased this tutuma from an Argentinean hippie on calle España. I like the carvings and use it to serve the ayahuasca.” Tutuma’s are a type of hollowed-out calabash gourd used to serve a fermented corn beverage called chicha. Chicha is especially popular in the Cochabamba countryside where it is brewed by families and sold in buckets. Badi tells me the tutuma also has many uses in the Amazon. “Its not just for drinking chicha, you know.” As if reading my mind. “Its extremely useful. You can use it for cooking, to bathe yourself, to store things. They come in all shapes and sizes. Its beautiful and natural, and that’s why I like to drink the ayahuasca out of it.” I pick up the bottle of ayahuasca and ask; “And this, where did you get this form?” “From a shaman outside Riberalta. My family’s town is nearby. Its the only place I know where you can get it in Bolivia. Of course people have ceremonies in the Amazon but its really hard to get in touch with them. And if you did, they probably wouldn’t want to sell you any ayahuasca anyways.” I have so many questions, I don’t even know where to start. In the end, we decide its a good place to end. Coco enters the living room again, this time depositing a queen size mattress on the floor. Their ceremony is about to start and its time for me to go. I shake Coco’s had, kiss Badi on the cheek and show myself out. So many questions, I think to myself. When will we continue this conversation?