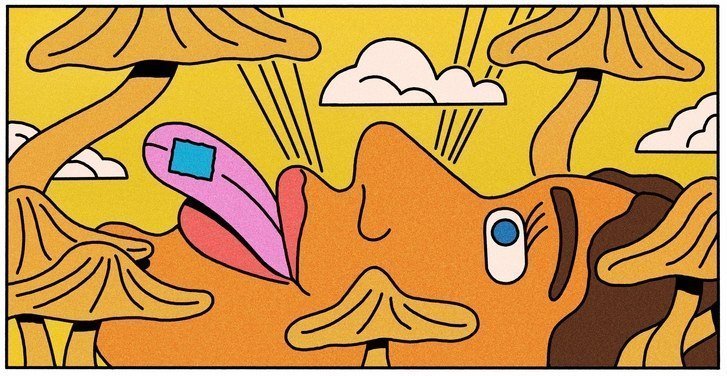 Microdosing of 10 to 20 micrograms (of LSD) allow me to increase my focus, open my heart, and achieve breakthrough results while remaining integrated within my routine. My wit, response time, and visual and mental acuity seem greater than normal on it. – Madeline, The Psychedelic Explorer’s Guide

On a beautiful morning in Amsterdam, I grabbed my vial of LSD, diluted down with half high-grade vodka and half distilled water, and told my friend to trust me and open his mouth. While semi-carefully measuring the droplets for his microdose, I told him to whirl it around in his mouth for a few minutes before swallowing the neuro-chemical concoction. I quickly followed suit.
We had one of the best walking conversations of our lives.

I first became immensely curious about the potential of microdosing psychedelics after reading this captivating story about James Fadiman and his research. After a few test-runs, I knew I stumbled upon something significant.

Today we are witnessing the birth of a truly remarkable epoch. With the psychedelic renaissance well underway, consisting of new fascinating research, the coming out of thousands of individuals and the introduction of many, hitherto unknown, psychoactive plants steeped in their cultural context of healing and initiation, we are now facing some new and interesting questions.

I think one of the more fruitful directions we can take is towards is microdosing.

This manner of integrating psychedelics, also known as a psycholytic dose, doesn’t inhibit ego-functioning in the same intense manner as the ‘heroic’ Terence McKenna dose does. It is much easier integrated into non-psychedelic activities.

It is known that Albert Hofmann, the first synthesizer of LSD, continued this practice well into his old age while saying “it would have gone on to be used as Ritalin if it hadn’t been so harshly scheduled.”

What are the effects of microdosing that makes it so interesting?

James Oroc, the author of the amazing book Tryptamine Palace: 5-MeO-DMT and the Sonoran Desert Toad, while writing about the secret affair between psychedelics and extreme sports, says that taking psychedelics at lower doses, the “cognitive functioning, emotional balance, and physical stamina were actually found to be improved.”

For some, this might not come as a surprise, since Hofmann already spoke in a now famous interview that “Lysergic acid diethyl amide (LSD) is related in chemical structure to nicotinic acid diethylamide, known to be an effective analeptic.” (central nervous stimulant.)

Virtually all athletes who learn to use LSD  at psycholytic dosages believe that the use of these compounds improves both their stamina and their abilities. According to the combined reports of 40 years of use by the extreme sports underground, LSD can increase your re- flex time to lightning speed, improve your balance to the point of perfection, increase your concentration until you experience “tunnel vision,” and make you impervious to weakness or pain. LSD’s effects in these regards amongst the extreme-sport community are in fact legendary, universal, and without dispute.

He goes so far to suggest that, to some in the extreme sports subculture, taking a microdose at any physical competition is considered cheating. And this is not just the case for sports. P.G. Stafford and B.H. Golightly write in LSD — The Problem-Solving Psychedelic about a student that wanted to learn german making huge strides under the influence of an unknown amount of LSD. These are the words of the student:

[blockquote]It was a week before registration and it depressed me tremendously that I had not spent the summer learning German, as I had planned. I had intended to give myself a crash course so I could take second-year German, which I needed for my study in physics. I had heard of a woman who had learned enough Spanish in a few days, via LSD, to speak it fluently when she had to go to Mexico on business.

I had taken LSD before, and while I couldn’t see how she did this, I decided it was worth a try. I hadn’t even gotten around to picking up a textbook, but I did have a close friend who knew German well and who said he was willing to “sit in” while I took the drug and try to teach me the language.

Fortunately, I knew something about conjugation and declension, so I wasn’t completely at sea. I wanted to get worked up and feel involved with the language, as it seemed that this must be at least part of the key to the problem, so I asked my friend to tell me about Schiller and Goethe, and why the verb came at the end. Almost immediately, after just a story or two, I knew I had been missing a lot in ignoring the Germans, and I really got excited. The thing that impressed me at first was the delicacy of the language (he was now giving me some simple words and phrases), and though I really messed it up, I was trying hard to imitate his pronunciation as I had never tried to mimic anything before.

For most people German may be “guttural,” but for me it was light and lacey. Before long, I was catching on even to the umlauts. Things were speeding up like mad, and there were floods of associations. My friend had only to give me a German word, and almost immediately I knew what it was through cognates. It turned out that it wasn’t even necessary for him to ask me what it sounded like.

Memory, of course, is a matter of association, and boy, was I ever linking up to things! I had no difficulty recalling words he had given me—in fact, I was eager to string them together. In a couple of hours after that I was reading even some simple German, and it all made sense.

The whole experience was an explosion of discoveries. Normally, when you’ve been working on something for a long time and finally discover a solution, you get excited, and you can see implications everywhere. Much more than if you heard someone else discovering the same-thing. Now this discovery thing, that’s what was happening with me—but all the time.

The threshold of understanding was extremely low, so that with every new phrase I felt I was making major discoveries. When I was reading, it was as though I had discovered the Rosetta Stone and the world was waiting for my translation. Really wild!

In the 60’s the creativity enhancing effects of psychedelics were already hailed as revolutionary. One significant study investigated the effect of 100 micrograms of LSD on top of the field experts who had been struggling with a hard problem for months. Their solutions were reviewed by a panel of other experts in the same field. As Tim Doody reports;

LSD absolutely had helped them solve their complex, seemingly intractable problems. And the establishment agreed. The 26 men unleashed a slew of widely embraced innovations shortly after their LSD experiences, including a mathematical theorem for NOR gate circuits, a conceptual model of a photon, a linear electron accelerator beam-steering device, a new design for the vibratory microtome, a technical improvement of the magnetic tape recorder, blueprints for a private residency and an arts-and-crafts shopping plaza, and a space probe experiment designed to measure solar properties.

Psychedelics can be described as “non-specific amplifiers”, and, as such, not just creativity can be enhanced, also the distressing states of mind. In smaller doses this is not as overwhelming and therefore, if used properly, can be quite beneficial.

Myron Stolaroff, while writing about the usefulness of psychedelics in the practice of buddhism, argues that low doses of psychedelics can be extremely beneficial to improve ones meditation practice.

The use of low doses often can be much more effective in dealing with our “psychic garbage.” Many do not care for low doses because they can stir up uncomfortable feelings, and they prefer to transcend them by pushing on into higher states, but it is precisely these uncomfortable feelings that must be resolved to achieve true freedom.

With low doses, by focusing directly on the feelings and staying with them without aversion and without grasping, they will in time dissipate. Resolving one’s repressed feelings in this manner clears the inner being, permitting the True Self to manifest more steadily. Such a result provides greater energy, deeper peace, more perceptive awareness, greater clarity, keener intuition, and greater compassion. It permits the deepening of one’s meditation practice. The surfacing of buried feelings that this procedure permits often can bring new understanding of one’s personality dynamics.

The potential to improve cognitive functioning, body awareness and our spiritual evolution with a microdose of psychedelics are limitless. There are five categories by which we can describe the overall effects of microdosing LSD. I gathered these from the various first person reports I’ve quoted so far and my own extensive experimentation.

To be able to experiment with these states of conscious in a safe and constructive manner, be sure to follow these guidelines.

Different ways of being are possible, and with that, a different world. Aldous Huxley envisioned in Island his last and, according to himself, his most important book that the moksha medicine, a potent psychedelic mushroom, could be integrated in daily life, education and new rituals. They could help enlighten people and help them move through transition by means of initiation.

I don’t think we will see such a widespread institutional integration just yet, but with microdosing we are able to reap the benefits without the perfect setting of Huxley’s Island.

Enjoy the magic, my friends.